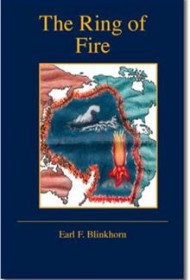 Earl F. Blinkhorn’s natural disaster thriller is about a sequence of catastrophic earthquakes and volcanic eruptions around the Pacific Ring of Fire.
Reminiscent tonally of the disaster movies of the 1970s (The Swarm, Earthquake, The Towering Inferno, etc.), the novel revolves around Paul Davies, the head of Earth Sciences for the Geological Survey of Canada and arguably the world’s most knowledgeable scientist in the fields of geology and volcanology.

Separated from his emotionally unstable and quite possibly deranged wife — a fellow geologist who lives and works in America — Davies becomes romantically involved with a co-worker, seismologist Loren Jessaume, as he tries to not only make sense of the increased tectonic and volcanic activity throughout the Cascadia Subduction Zone but also to save the lives of millions of people living in the region (the west coast of North America). The focus soon shifts from an unfolding global disaster to the sexual antics of Davies and Jessaume and an outlandish subplot involving Davies’ wife, who turns out to be a mass murderess with connections to the sexual slave trade.

The Ring of Fire is a novel of odd extremes. The author’s writing style is unfortunately careless: the narrative voice inexplicably moves from first-person to third-person throughout, grammatical errors abound, and there are numerous unwieldy scientific infodumps that read like encyclopedia entries that have been dropped into the storyline. Although the narrative verges on being unreadable at points because of the aforementioned flaws, Blinkhorn excels in an area that many writers struggle with: character development.

Blinkhorn creates a duo of three-dimensional protagonists that are undeniably realistic. Unfortunately, these characters aren’t exactly endearing — they rut like hormonal teenagers while the world literally crumbles around them. As a result, those who make the effort to read this novel to its conclusion will find themselves indifferent about the characters, however well-drawn, and their struggles.