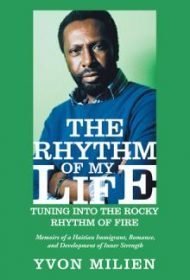 Yvon Milien’s book, The Rhythm of My Life, recounts his life and many loves.

The author endured an impoverished, chaotic boyhood in Haiti, eventually immigrating to the U.S., where he attended Brigham Young University, Syracuse University and City University of New York, earning multiple degrees. He now works as a high school teacher in New York.

Although he faced bureaucratic trials of immigration and racism, he builds his life’s lessons around his romances. In chapters with titles like “Rosita—A New Dream” and “Narnette,” Milien diligently lays out his amorous history, including his teenage crushes as well as one lover’s death, being jilted by another and divorced by yet another. The women are drawn in broad strokes—the older woman, the young impressionable girl, the aggressor— and remain only mildly interesting.

More intriguing is his search for meaning through the various religions he experiments with over the years, including Mormonism, Jehovah Witness and Buddhism. In essay-like sections interspersed throughout the book, Milien applies a variety of religious thought to his amorous experiences. Using his life lessons as examples, he instructs readers in conquering ego, finding faith in God and accepting life’s occasional miseries.

Milien’s life is dramatic, but his presentation is understated; as a result, some of the stories seem almost unreal. The first chapters deal with a voodoo curse put on him as a boy and how his Haitian family worked to get it lifted. He offers little context or explanation, accepting the precepts of voodoo as calmly as he later accepts Mormonism and Jehovah Witnesses. In fact, most of Milien’s anecdotes call for more emotion; instead, the author chooses storytelling stripped to the bare essentials.

Milien explains that because many people grapple with the same problems he has faced, documenting his “sour, spicy life,” might help others. Although he doesn’t offer much by way of deep self-examination, his essay-like sections are the book’s real value and might appeal to some readers.