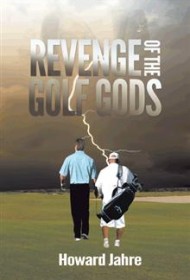 The problem with golf novels is that readers who aren’t avid golfers can get bogged down by repetitive descriptions of the intricacies of the golf swing and the vagaries of nature that influence every shot. Even great titles such as Michael Murphy’s Golf in the Kingdom, Dan Jenkins’ Dead Solid Perfect and William Hallberg’s The Rub of the Green fail to resonate with many.

In this entertaining debut, Howard Jahre largely overcomes that obstacle. While the author does, indeed, provide many detailed descriptions of his protagonist’s struggles on the golf course, he also adds a love story and a subplot involving a genius scientist’s decades-long search for a cure for ALS and Parkinson’s disease — one that has a beneficial side effect regarding a person’s golf swing.

Gordon Howard is a talented golfer with hopes of making the pro tour, but being part of the wealthy country club set, he’s never had to conquer adversity and always chokes in the end. Only his caddie and fiancé still believe in him. Enter the greedy, deformed scientific genius who wants to capitalize on his discovery and make big money while getting revenge on those who have thwarted him. Thus, with the aid of some little white pills, the struggling amateur golfer finds himself on the cusp of greatness, qualifying for the U.S. Open at Bethpage Black.

Although non-golfers may be uninterested in the golf jargon and technicalities, the scientific, mystery and romantic elements will help keep them reading. Jahre has a rare gift for writing natural-sounding dialogue, and while the characters aren’t particularly likeable, they are carefully drawn and believable. Meanwhile, golfers will appreciate that Jahre knows the fine points of the swing and temperament, and it’s obvious the author has been lucky enough to play the courses where Gordon Howard develops his game and personality.

All of this creates a story that is on par with, if not better than, the vast majority of golf novels.