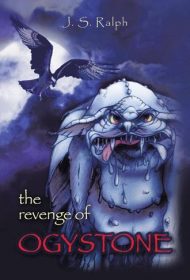 In this new novel by J. S. Ralph, things are aroar in Capel-Le Ferne as the monstrous Ogystone reappears in the lives of 13-year-old Suzy, her grandparents and her friends, including Scratch, her faithful Paxtey.

Suzy has been fortunate to bond with a Paxtey, one of a group of humble, caring, life-loving creatures, with long ears and wings that carry them like the wind. They can also speak every language through extrasensory powers.

The plot gears up when Suzy’s pal Julie finds her own special Paxtey guardian, who alerts the girls and fellow Paxteys that Ogystone is back, and the monster is bent on revenge after a former attempt to make him “puff out” (disappear).

King Tobias must be warned so he can organize an effort to destroy Ogystone and his minions forever. Meanwhile, Suzy, Nan and Grandad learn that a mining concern has begun gathering the underground fire pebbles that help keep the earth warm. If they are stripped away, the whole world is in danger.

J.S. Ralph has chosen a gutsy girl as her heroine and created a far-reaching fantasy world that will appeal strongly to young adults. Set in the early 21st century but in an imagined realm where technology is little utilized, the focus is on nature and the magic underpinning it. For example, the word “Paxtey” combines the concepts of peace and pixies, and there are “Havenly” angels who intervene when needed. Especially compelling is the hint of global disaster: the diminishing of energy caused by mining, which could potentially destroy the ecosystem. One over-arching theme will also appeal to thoughtful readers: Scratch’s motto, “Never take more than you really need.”

Fans of Ralph’s earlier work will welcome this new story, while those just discovering her work can enjoy it as a stand-alone tale of teen heroines, their pixie brothers, and their determination to save their mystical home. All will be eagerly awaiting the next saga in the series.