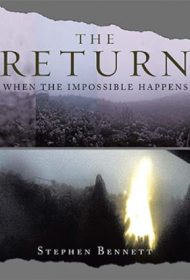 In The Return: When the Impossible Happens, Australian author Stephen Bennett chronicles how, in 2018, his elderly Thai father-in-law stopped breathing and was removed from life support not once, but twice, before inexplicably coming back to life both times.

The medical community calls the extraordinarily rare, unexplained phenomenon where a seemingly dead patient spontaneously revives “The Lazarus Syndrome.” It refers to the Biblical character who returns from the dead. Bennett simply calls it proof of the power of faith.

When Bennett prepared to see his father-in-law’s body before the funeral, the father-in-law had been officially dead for 24 hours. The author recalls a sudden commotion and hearing his wife screaming that her father was alive. “My hair stood up on end with goosebumps,” Bennett writes. “I walked in to see Salad lying on a bed breathing.”

It’s a remarkable story bolstered by screenshots of medical readings as proof of events. Bennett is a colorful writer with a solid sense of detail, but he strays from the core story of his father-in-law’s seeming resurrection to include several superfluous story lines, including how God protected him and his family from the pandemic. He also throws in odd meteorological reports of weather patterns and unexplained flashes of light, which he interprets as random religious visions.

Sadly, the book becomes a hard-to-follow jumble of events skipping between decades.

In sum, while the story is rich with potential, a sharper focus is needed in order to keep readers transfixed.