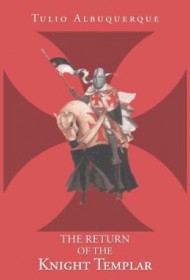 Tulio Albuquerque tackles a wide range of subjects, questions and settings in his work of historic fiction, The Return of the Knight Templar.

The story kicks off in southeastern Brazil in 2000, as a military chaplain survives a harrowing attack from Colombian guerrillas. What follows is a story arc that features themes about faith, religion and purpose, as the author also weaves in contemporary questions about narco-trafficking.

The brush with death affects the chaplain named Reinaldo on a deep level. His dreams start to take on a mystical quality as he’s suddenly transported back in time in his sleep. Vivid visions of himself as a member of the ancient order of the Knight Templars start to take over his slumber. In these dreams, he’s a French knight named Jean, a man bound for the Holy Land in 1186 following the murder of his wife and young child.

As he struggles with deep questions of faith in his waking hours, Reinaldo regresses back centuries in his sleep and lives the life of another man. In a series of these specific and detailed dreams, he boards a ship set for Jerusalem as Jean.

It’s clear that Albuquerque has done his homework in setting out this dual narrative. His novel incorporates plenty of historical facts from the 12th century, as well as modern information from the drug wars in South America. It’s also clear the author is serious about the theme of regression to past lives, and he treats the phenomenon with an almost academic attention to detail.

Unfortunately, these elements don’t always feel seamless. Inadequate copyediting and strange syntax can make the journey between 2000 and the 12th century seem choppy and labored. At its best moments, however, the book is an ambitious melding of themes about faith, history and the toll of the drug trade and will appeal to medieval history buffs and those interested in the issues facing contemporary South America.