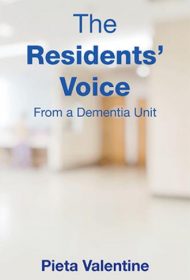 Physiotherapist Pieta Valentine based her novel, The Residents’ Voice, on more than ten years of experience working with geriatric patients, many of whom had dementia.

The story’s protagonist, Daisy, is a former physiotherapist who takes a job as a “diversional therapist” in a locked unit at a retirement village in Christchurch, New Zealand. Through Daisy, we come to know the various residents and learn about their struggles.

We meet Jane, who misses her busy outdoor life on a farm, and Jack, a military veteran who likes everything tidy, among others. Daisy discovers paths of connecting with them, treating them with respect and encouraging them to find ways to be mentally and physically active.

Daisy works tirelessly with the residents, persevering despite occasional clashes with higher-ranking staff. When she encourages Jane to be more confident, Daisy meets resistance from the unit manager, who tells her, “Confidence is for children when their brains are still growing, not adults. You are not to talk to the residents about confidence. And don’t talk to them about memory. They have none, and it will never come back!”

The book is written simply, yet ably evokes the personalities in the village. Unfortunately, it also has some problems. The author asserts that dementia is psychological, not physical. In fact, Alzheimer’s disease and other forms of dementia are organic diseases of the brain; they’re neurological, not psychological.

The narrative also has occasional awkward sentences (“He kept his thinking good.”) and copyediting errors (such as when a resident would “wrap” people who take her walker on the knuckles or when a stylish resident is described as “the best turnout woman on the unit).

The Residents’ Voice deserves credit for its emphasis on finding creative ways to stimulate dementia patients, but it should be read in conjunction with other books that explain the different types of dementia and their prognosis.