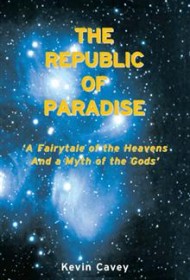 With The Republic of Paradise, Kevin Cavey presents a work in the tradition of spiritual and revelatory writers, such as Emanuel Swedenborg and Dante Alighieri, who sought to reveal their vision of the world’s theological underpinnings. Cavey uses the format of a novel to carry his message because he believes that “discourse cannot describe the full meaning” of his theory.

The novel’s protagonists are participating in an explorative space journey when their spaceship is drawn into another dimension. There, the characters meet the “Father of all Creation,” Jesus and Mary (Miriam), and a host of saints, and are given a tour of the author’s version of purgatory and paradise. All is not well in the heavenly domain, however, for journeying with the space travelers are some malcontents who combine forces with those of the evil Thormentus to wage war on Heaven.

During the tours and space journey, readers are treated to the author’s speculations concerning Plato’s eidolon—transcendental perfect forms that serve as patterns for individual replications—and da Vinci’s idea of the Vitruvian man (or in this case, woman) as a schemata for the universe. The author also theorizes about the connection between physics and metaphysics, particularly in the relation to energy dynamics.

The problem with this work, however, is that the author is clearly more interested in his theories than in the novel’s structure. None of the characters have any inner life to speak of, and they are rendered with so little psychological detail that, except for a few descriptions and incidental plot lines, they could be interchangeable. The novel also suffers from numerous grammatical errors, including run-on sentences and tense-agreement issues.

Consequently, although The Republic of Paradise may garner an audience of readers particularly interested in speculative metaphysics, it will have limited interest for the general public.