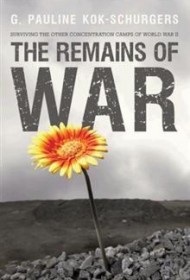 Japanese forces invaded Indonesia in 1942, putting an end to nearly a century and a half of Dutch control and killing thousands in the process. For the next three and a half years, Dutch women and children were held in concentration camps, separated from husbands and fathers who were forced to work in places undisclosed to their families.

The misery the Dutch endured at the hands of their Japanese captors – torture, starvation, diseases and death – are mostly missing from the annals of World War II atrocities and are among the author’s reasons for telling her story after 65 years. And it clearly is her story, even though she chooses to tell it through the eyes of her nine-year-old self, whom she renames Sofia. She was the oldest of four children born to a loving father and a distant, depressed mother who reserves her limited affection for her only son and calls Sofia “a child of the devil.”

Quite the contrary, Sofia proves a narrator of exceptional depth and wisdom, both hard-won and heartbreaking, as we follow her and her siblings through a succession of increasingly brutal camps. Along the way, food becomes scarce, malaria pervasive, and death commonplace. Robbed of all hope and stripped of all dignity, the prisoners shuffle through a Twilight Zone of mistreatment and malnutrition, succumbing to dysentery, fevers, festering sores and internal parasites. “What kind of a person would I be when I grew up, with all these horrible memories in my head?” Sofia wonders.

Judging by her vivid, clear-eyed, lyrical memoir, an angry triumph 65 years in the making, it’s plain to see the kind of person she became: resilient, tenacious, and intrepid enough to bear witness — a survivor, in spades. Her moving story will linger in the reader’s memory long after the last page is read.