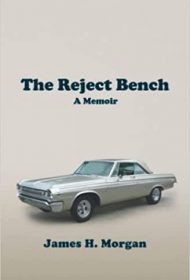 In this memoir, the author recounts his teen years in the 1960s in Claremont, Calif., beginning with his family’s move there until the day before he’s drafted into the U.S. Army.

Jim Morgan has just finished his freshman year in high school when his father’s promotion to sales manager of a beer distributorship prompts their move. It’s only five miles from the Upland neighborhood where he lived previously, but it feels to Jim like a “different state.”

He enrolls in school, where he’s a lackluster student despite scoring well on national standardized tests. He learns to play the clarinet, quite well according to friends, but refuses to play in the school talent show. He has a natural ability at sports, but resists the high school football team.

Essentially, Jim is the average teen, a sports and music fan who is uncertain about his future but largely enjoying life despite being relegated to “the reject bench,” dubbed so by Jim and friends because they aren’t in the top-tier social group. Jim’s teen years pass, President Kennedy is assassinated, racial tensions in the South increase, and the Vietnam War grows closer, making the threat of the draft a reality.

The author notes that he was motivated to write his memoir after his father suffered a brain injury and suddenly began sharing memories he hadn’t heard before. He decided likewise to share events of his youth for the benefit of his daughters and future generations.

While he states in the Preface that his life isn’t “especially noteworthy,” his stories are interesting, often wryly humorous, while at the same time grounded in a tumultuous era that saw our society significantly changing. The writing is smooth and lively.

Memoirs like this can be tedious to readers beyond family, but The Reject Bench should engage a wider audience with its well-developed characters, interesting details of the time and a realistic sense of what it was to be a teen in the 1960s.