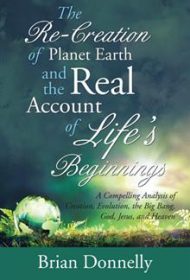 In The Re-creation of Planet Earth and the Real Account of Life’s Beginnings, Brian Donnelly delivers harsh criticism against scientific materialism and traditional creationism while offering a way for faith and science to coexist peacefully in the 21st century.

In a series of short essays on intelligent design, the fragility of political systems, and the need to put God first in all things, the author, a devout Christian, challenges evolutionists who continue to propound the belief that human beings evolved from primates even though he notes that gaps in the fossil record suggest otherwise. As the author writes, “This notion that apes are our common ancestors just because we share common DNA with apes doesn’t prove anything…We also share 50% of our DNA with bananas.” Traditional creationists are also taken to task since many fail to embrace fossil evidence for the existence of life on earth dating back millions of years.

Donnelly offers a compromise between these two opposing worldviews, proposing that God created the world over billions of years but that the distinct human experience first chronicled in the Bible, what he calls, re-creation, took place in the last 6,000 years following a mass extinction of creatures big and small during the Ice Age. “It is a strong possibility, considering the megafauna extinctions and the possible extinctions of all hominins that the slate was wiped clean and we started anew with the creation of modern day humans and animals that we know today that could have only been accomplished by God the Creator.”

While this leap of faith may make agnostics and atheists grimace, Donnelly writes in earnest and his tone is conversational, warm, and often witty. Many of his arguments only skim the surface, but the author often brings up convincing and legitimate problems in the materialistic bias that often influences contemporary scientific discussion, as well as those regarding the shortcomings of Christian fundamentalism. For open-minded believers, there’s plenty here to spark debate.