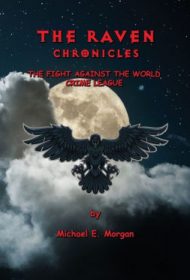 The first installment of Michael E. Morgan’s Raven Chronicles—a good versus evil contemporary fantasy with shamanistic undertones —revolves largely around Gray Wolf, an Apache who embarks on a journey of self-discovery.

When a white man kills clan medicine man Yellow Horse in a dispute, Gray Wolf is pressured into becoming the next spiritual leader. But a vision in a sweat lodge spurs him to leave the reservation in search of his true purpose in the world.

Joining the Army Rangers, he is gravely injured during a dangerous mission in Afghanistan. Then, while in a coma, Gray Wolf meets shaman Osceola in the spirit world and begins to learn arcane knowledge that could, if used wisely, restore the “balance” in the world. After he recovers, he eventually joins a top-secret black ops group of “warriors endowed with supernatural abilities” that fight the forces of darkness.

The Native American folklore and Mesoamerican mysticism threads involving Gray Wolf—particularly his training as a Nagual (a human with shapeshifting abiilty)—hold great narrative potential. Unfortunately, the plot has many structural flaws, the largest being the lack of meaningful action throughout most of the story; the main villain, for example, isn’t introduced until page 181 of a 240-page book.

The characters’ two-dimensionality is another problem. Supporting characters are all cardboard, especially the villains, who, except for their genders, are almost interchangeable.

The time-period is initially confusing as well. After Gray Wolf joins the Rangers, he embarks on a mission to take out Osama bin Laden (who was killed in 2011). This may perplex readers who have believed, up to that point, that the story was set in the present day.

In sum, this is an ambitious, spiritual-powered fantasy that ultimately falls short.