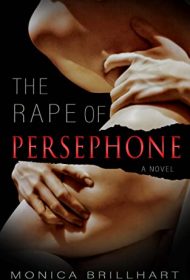 In his “Hymn to Demeter,” the Greek poet Homer wrote about Persephone, the beautiful daughter of Zeus and priestess Demeter, who is abducted by Hades, King of the Underworld. Homer’s poem is just under 500 lines long. Novelist Monica Brillhart has reimagined this story into an enchanting 431-page novel, the first of a trilogy.

The story takes place in ancient Greece. Brillhart offers some context in her introduction, explaining that in the original Latin, the word “rape,” means “seized or carried off, and does not necessarily imply sexual violence.”

In Homer’s myth, teenage Persephone is picking a narcissus when Hades’s chariot rises from the earth and he seizes the innocent girl by “her delicate ankles,” dragging her into hell. In Brillhart’s version, Persephone still has delicate ankles, but she’s not so innocent. She boldly steals a purse of coins Zeus gave her mother and buys passage on a ship called the Narcissus, aiming to finally meet her father. But a natural disaster thwarts her plan, and eventually Hades’s soldiers kidnap and carry her away to his dark castle. There, she develops a special bond with the Hounds of Hell and a serious crush on Hades.

In an original twist, the mythological characters here are humans (to be raised as gods after death). When Hades takes a ship to Olympus to ask Zeus for Persephone’s hand, he worries about seasickness. Zeus, the god of gods, has a bum knee. The author provides immediacy by using colloquial language in the present tense. Yet while she breathes contemporary life – and abundant humor – into this ancient tale, she remains faithful to the bones of Homer’s poem, quoting portions of it at the start of each of the book’s five sections.

This beguiling novel is sure to appeal to fans of Homer’s poem, who will enjoy the modern twist on familiar characters. But even those new to the story will be utterly charmed by Brillhart’s novel—and eagerly await the sequels.