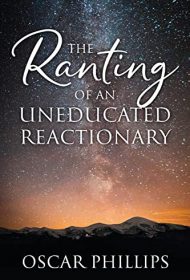 In The Ranting of an Uneducated Reactionary, Oscar Phillips—who notes that he became a “conservative” who “then began moving to the right” and describes himself as “one of America’s pre-eminent anti-socialists” — writes about the ills of liberalism.

Phillips is a libertarian who favors laissez-faire capitalism. “The three Cs (the Constitution, Capitalism and Christianity),” he writes, “are the bedrock and linchpin of freedom/liberty.” Those who follow the dictates of capitalism, he notes, learn to practice individual accountability, whereas, those who participate in socialism accept rules and restrictions in exchange for entitlements like Medicare or a minimum yearly wage. “Libertarianism is the foundation of capitalism,’” he asserts. “Right-wing basically means capitalism,” he adds, while “left-wing basically means socialism.”

Phillips provides reasoned explanations for some of his stances (although this isn’t the sort of book to cite studies or analyze statistics). Unfortunately, the book is dominated by broad pronouncements, and any serious thought is undermined by the author’s penchant for crass and vitriolic comments.

He bashes presidents from George H.W. Bush to Donald Trump, Obama Care (he calls the former president “Barrack Hussein Obama”) and social justice movements. He states that “Blacks, Mexicans, Puerto Ricans, and other Hispanics” want the government to take care of them and give them “free stuff” and that those who believe “there is no voter fraud in our country are liars who always vote Democrat.”

In his chapter titled “The Fems,” he writes: “Henceforth, the feminists’ new pro-abortion motto will be, ‘Government get your stinking hands off my body but stick a wad of cash in my uterus!’” He describes Ted Kennedy as “slobbering over an unwilling woman on a restaurant table” and refers to Paul Robeson as a “singing lackey to great Mother Russia….”

The Ranting of an Uneducated Reactionary may appeal to some libertarians who share the author’s viewpoints. Those who differ, however, are unlikely to be swayed by the rants the title advertises.