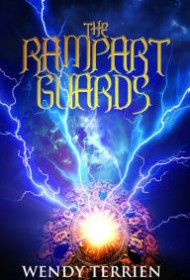 In many ways a classic tale of a young hero chosen by prophecy, this first entry in the Chronicles of Jason Lex series for young adults also introduces some unique and surprising takes on the genre.

After months of acting strangely, Jason’s mother vanishes into the cold wilderness of Colorado. Her grieving family moves to a small town to start over, but strange occurrences catch the attention of her youngest son, 14-year-old Jason Lex. When his eccentric uncle realizes Jason can see cryptids—legendary creatures like yeti and skyfish normally invisible to humans—he reveals the complex system that allows cryptids and humans to coexist. Jason learns that his family is part of a long line of “Rampart Guards,” who are supposed to protect this tenuous balance. He also learns that the system is under attack, threatening the future of humankind and all the legendary creatures hidden in the world.

The assured voice of The Rampart Guards draws readers in, revealing a world secretly populated by legendary creatures. In addition to dealing with unusual beasts, Jason faces interesting, complex family relationships that will resonate with many readers. Themes of love, trust, and betrayal are engaging and generally handled appropriately for a younger audience, although moments of graphic violence may surprise some readers.

The use of cryptids is refreshing and unique, but unfortunately, their true introduction occurs so late in the novel, readers don’t get a chance to explore the implications of their existence before the fate of the world is endangered. Additionally, the details of this world are primarily explained rather than illustrated in immersive experiences, sometimes causing the stakes to feel driven by the plot rather than organically.

Despite such flaws, this is an intriguing introduction to what promises to be an expansive series. The Rampart Guards introduces engaging characters, a unique concept, and the potential for developing both of these more fully in future novels.