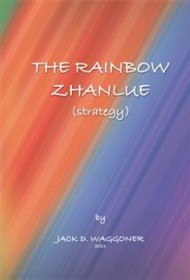 It opens in 1998 as fictional Chinese President Yanlin Hu summons security chief Chung Jet How to map out a plot dubbed the Rainbow Zhanlue. The plan is for Jet and partner Fei Yang to set up an organization called CA2, the Chinese-American Civic Organization. With a budget of one-million dollars, their role is to elect a bought-and-sold candidate for President of the United States.

Waggoner delivers international spycraft for the secret agents and a romance between Jet and the girl of his dreams. There’s also much deliberation on the buying of U.S. debt, assisted by massive Chinese purchases of global natural resources. As the conspiracy lurches into U.S. politics, the tone of the book becomes pointedly bitter and cynical.

In one of his many memos, Jet advises President Yanlin Hu on “social justice”: “People that espouse this concept will be people we can easily infiltrate as they are code words for Socialism.” In another, he writes: “Seek to turn the enemy into a multilingual and bicultural country. No nation can survive the tension for long,”

Through their globe-trotting investigations, the two agents discover the book’s Big Secret: evidence that candidate Barack Obama may not have been born in the U.S. Waggoner paints Obama as an amateurish, appeasing dilettante. As the senator accepts an unsavory campaign donation, he muses, “All I know is that this little black kid from Kenya, I mean Hawaii, has finally come of age. No more kowtowing to the Chicago bosses. This makes me my own man. Hot damn!”

This Clancy-esque thriller may initially intrigue readers with its post-neocon slant, but in the end the novel’s talk-radio vitriol derails its narrative punch.