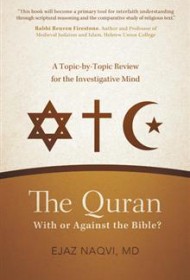 Dr. Ejaz Naqvi is a practicing physician and president of a California Islamic center. His book, The Quran: With or Against the Bible?, analyzes, compares, and contrasts the two books. Along with an introduction and conclusion, Naqvi’s work has six sections: “God”; “The Quran on the Quran”; “The Quran and Science”; “The Quran on Prophets, Scriptures, and People of the Book”; “The Quran and Eschatology [study of the last times]”; “The Quran and Daily Life.”

Naqvi frequently brings in Biblical quotes to supplement the Quran on these topics. Nevertheless, he is more focused on offering a topical introduction to the Muslim holy book. While both Scriptures often agree on basic issues—e.g., there is one God, the Creator of all things—there are many places where they don’t agree. At times, these involve major doctrines. The Quran for instance, denies that Christ’s crucifixion took place: “they killed him not, nor crucified him” (Qur’an surah 4:157-158); the Bible, however, in numerous places (including, as Christians understand it, Old Testament prophecy) speaks of Christ being crucified, a fact alluded to even by the Roman historian Tacitus (A.D. 56-117).

Such a major issue is problematic for Muslim apologists. The Bible was written hundreds of years before the Quran. In spite of Muslim claims of these earlier Scriptures having “been modified, and even corrupted,” Naqvi (and others) sets forth no ancient manuscript to corroborate that assertion. Perhaps because of such difficulties, Naqvi treads lightly when dealing with the two Biblical texts often cited by Muslims as predictions of Muhammad: Deuteronomy 18 and John 14. For the former, he simply concludes “the debate goes on,” and the latter he leaves “unresolved.”

Naqvi’s book is well written. Muslim readers will find thoughtful introductions to a wide variety of topics; Christian and Jewish readers will find it a good example of Islamic thinking. All will appreciate the writer’s irenic tone and invitation at the end to “agree to disagree respectfully…”