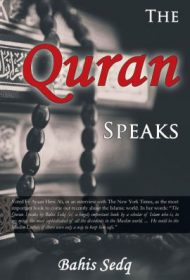 In a 2015 interview, New York Times bestselling author Ayaan Hirsi Ali stated that Bahis Sedq’s The Quran Speaks is “a hugely important book by a scholar of Islam who is…the most sophisticated of all the dissidents in the Muslim world. The tragedy is that he has to publish under a pseudonym. He could be the Muslim Luther, if there were only a way to keep him safe.” Indeed, Sedq’s book is sure to be controversial in religious and secular circles.

In a well-researched, clearly-stated work, the author, who counts himself a faithful Muslim, looks to “provoke thought” and presents an examination of what he sees as ambiguities and possible paradoxes in the Quran.

Sedq challenges: If the Quran is the literal word of God, how can it contain incongruities? As the Quran itself states, “Had it been from any other than Allah, surely there would have been many contradictions in it. (4:82).” The author nonetheless points out “internal inconsistencies, mathematical deficiencies, and scientific discrepancies” and identifies variations and disparities on policies of inheritance, the creation of heaven and earth, the development of a fetus, and more. Sedq also explores different interpretations on what the Quran states about justice, polygamy, and women’s rights.  Moreover, he discusses the “Sword Verses,” sections of the Quran that state that Muslims should kill mushriks (polytheists and pagans) unless they repent and pay a tax, and fight with the people of the Book (Jews and Christians) who do not believe in Allah.

The narrative is accessible, with clean prose, and Sedq uses many different translations of the Quran to present the material as clearly and sensibly as possible. Ultimately, while looking to challenge fundamentalism, the book is an attempt to create dialogue, to “promote understanding and inclusiveness amongst all religions (not just Islam)…”

Bottom line: This is an intriguing, engaging look at a religion still misunderstood by many in the West and abroad. It is bound to provoke heated debate.