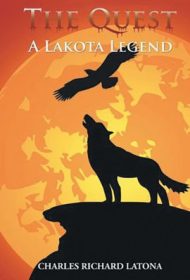 The Quest is a captivating historical novel about a tribe of Lakota Native Americans and their holy man’s search for his successor.

The novel begins with the man responsible for his tribe’s spiritual health, White Wolf (also known as Wicasa, or Holy One), receiving a vision of who will follow him. The book then shadows White Wolf and the young men he trains as they undergo coming-of-age rites to become braves. Sadly, not all survive, and a tribesman’s violent assault causes the community great tragedy. Eventually, though, White Wolf discovers the next Wicasa, and they form a deep partnership as the older man prepares him for his duties.

The novel has the feel of authenticity, offering many details about life during this time, from crafting arrows and lances to preparing animals for cooking and clothing. It also includes descriptions of ceremonies, such as the Sun Dance, a painful ritual that White Wolf’s students endure to prove their adulthood. Visions play an important role, from White Wolf’s own vision concerning who will follow him to his students’ insights into their futures. Even with his experience, White Wolf cannot interpret his vision until it is revealed.

Storytelling is also important here, as White Wolf’s students share their adventures of surviving independently from the tribe for several days, part of their coming-of-age rituals. Unfortunately, some of the tales told are repeated verbatim, which readers might find unnecessary. Additionally, the book has multiple misspellings, most frequently “it’s” for “its.”

Despite such issues, the novel is replete with exciting drama: White Wolf single-handedly battles a group of savages; Thunder Eyes, a tribesman who suffers from rages from misusing sacred herbs, performs a shocking act of violence and faces an equally violent punishment; a buffalo hunt goes terribly wrong. Such passages are skillfully drawn and will keep readers turning pages.

With intricate details into a life and time most people are unfamiliar with, The Quest makes for a compelling read.