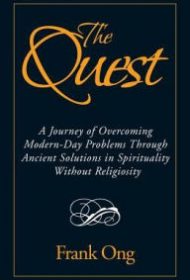 Frank Ong’s The Quest details one man’s exploration of ancient philosophies that encourage self-reliance rather than outside help.

Ong describes the book’s subject, Scott Lee, as a corporate man who is a non-theist (spiritual but not religious) with a Chinese cultural background. He’s financially secure, with a family, friends, nice house, and assorted possessions like fancy cars—all of which make him happy, but only temporarily.

Encountering challenges with his health and mental stability, he relies on traditional medicine: For his blocked arteries, he’s treated with stents; for his depressive episodes, he takes antidepressants. However, both conditions recur intermittently, despite the treatments. After other setbacks, including romantic heartbreak and the loss of his beloved mother, Lee realizes that he will have to depend on himself to get well.

He begins an intensive, decade-long study of Eastern philosophies, such as the Vedas (the primary texts of Hinduism), and various Buddhist and Chinese sacred writings. He takes up meditation and travels to exotic locations such as the Himalayas and Tibet, where he lives among practitioners at forest retreats, monasteries, and temples. Along the way, he discovers a lifestyle that has allowed pharmaceuticals and medical procedures to fade into the past.

While offering inspiration and insight (e.g. “A Buddhist saying is that we should guard our minds as closely as one should guard the thatched roof to prevent rainwater from seeping in”), the book has some limitations. The text, unfortunately, eschews chapter headings or subtitles, which can make the reading experience somewhat wearying. Additionally, the mostly straightforward prose occasionally becomes convoluted (“He had no knowledge about the country but that it had often been termed the last Shangri-La by some travelers offering the mystical notion towards it”). Finally, those widely read in spiritual topics—particularly the work of spiritual guru Eckhardt Tolle—will find little that’s fresh here.

Still, there are spiritual gems throughout. Readers new to the subject may appreciate the wisdom conveyed in these pages.