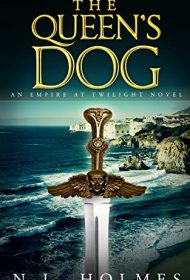 Nothing short of a towering masterwork of historical fiction, The Queen’s Dog is the third installment of Holmes’ Empire at Twilight saga, a series of standalone novels set in and around the Hittite empire in the 13th century BCE. It chronicles the story of Naheshi, a lowly eunuch slave who becomes entangled in a conspiracy that could cost him his life—and ignite a war between Late Bronze Age kingdoms.

Sold into slavery by Assyrian parents at a young age and castrated by his new owner, Naheshi is now living in Ugarit, a small but wealthy nation whose relationship to the Hittite Empire is that of a vassal: “semi-independent but owing their imperial overlords obedience, trade privileges, and military assistance.” Working as the young queen’s chamberlain, the now 38-year old eunuch is pulled into his queen’s dangerous machinations.

The queen, Taddu, is the beautiful daughter of the king of Amurru and married to the Ugarit king Ammishtamru. She’s not only having an affair with her husband’s younger brother, but she’s plotting with him to overthrow her husband and radically change the kingdom’s foreign policy. When Ammishtamru’s mother, the dowager queen, enlists Naheshi to spy on Taddu, whom she suspects of treachery, Naheshi is forced to make difficult decisions that could impact the peace and prosperity of the entire region.

While no novel is flawless, this one comes close. It offers deeply developed characters, a meticulously researched and vividly described setting, a complex plot, and relentless pacing that keeps readers turning pages. Simply put, this is a supremely gratifying reading experience.

Anyone who has had the opportunity to read Holmes’ Lord Hani mystery series or her Empire at Twilight saga will agree: Holmes should be a household name in historical fiction circles.

Hopefully, she won’t remain a secret for much longer; these novels are precious literary gems.