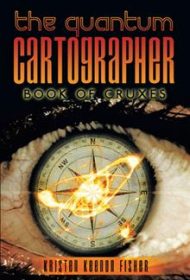 In this time-traveling science fiction adventure, a special boy with glowing eyes is sent back in time to save himself and all future life as we know it. The story comes together slowly, but satisfactorily, as the mysteries are eventually revealed.

The story begins in the year 2033, when Eliza Carrefour, a former scientist, and her two-year-old son, Nija, flee their home after dangerous men dressed in shrouds arrive to take her son for their own purposes. The men come from Holifax Industries, a phony business that fronts for a nefarious group that smuggles children across timelines.

Eliza and Nija escape to a safe house where Eliza’s only option is to send the youngster back in time alone through a portal. Little Nija is sent to the “Twentieth Century Millennium” in Ancient Kressya, which is the location of a magical and very powerful crystal known as The Cartographer that transports people through time. A rum-guzzling eccentric named Serros cares for the boy and mentors him as he gets older.

This dramatic beginning sets the stage for Nija’s dangerous adventures as he becomes involved with two battling factions seeking The Cartographer. Throughout his adventures with some newfound friends, he slowly discovers his true identity and purpose, which isn’t revealed until much later in the book.

The writing is crisp and clear, engaging the senses (although not emotions) and effectively painting a picture of the scenes (for example: “A mounting rumble slithers through the sand as a beastly hovercraft, outfitted with formidable-size cannons at its wing, moves in surely from afar.”)

At times, the complicated plot can be hard to follow as places, people, and eras shift from chapter to chapter. However, readers will quickly understand that the author remains in creative control at all times, guiding them through his carefully crafted story until its conclusion. Science fiction and fantasy readers will enjoy piecing together the parts of this entertaining time travel adventure.