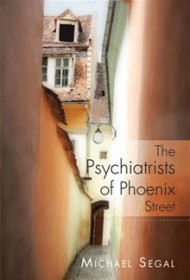 Psychiatric patients are no longer easy to recognize, Dr. Michael Segal laments in the foreword to his nonfiction story collection, The Psychiatrists of Phoenix Street. “They don’t look ragged, robotic, or foaming at the mouth, as if they belong in a ‘nut house.’ Where can you find the ‘good old’ psychotics?”

Psychiatrist Segal, a Romanian Jew who immigrated to Israel as a young doctor, answers his own question via the two-dozen case histories that make up his book, translated from the original Romanian. Holocaust survivors and military combat veterans account for the majority of his patients; post-traumatic stress disorder, the bulk of their suffering. Their psychological baggage, carried home from the barracks of Auschwitz, the battlefields of the Golan Heights, and the cells of the notorious Syrian prison El Mazeh, takes many forms: depression, insomnia, amnesia, hysterical mutism, and more.

Segal largely lets his patients tell their own stories, and some do this more successfully than others. At their best, they paint indelible portraits of resilience in the face of unfathomable suffering, like that of Mier, who survived 18 concentration camps by pretending to be a cobbler, and Hana, whose babies’ births triggered flashbacks of Nazis killing newborns.

Unfortunately, the long passages of direct quotes tend to blur all their voices together, rather than make them distinct. And while Segal proves himself a thoughtful and sympathetic guide when he resumes the narration, his overuse of exclamation marks (“Finally, dawn came!”) and unnecessary modifiers (“I nodded affirmatively”) proves distracting, as do the witticisms and summary quotes he often uses to end the stories, grace notes that can be at odds with the dark subject matter.

Segal’s Old World approach relies less on medication than on piecing together clues that often lead to significant improvement and even the occasional cure. Despite all, armchair detectives and amateur psychologists will enjoy being privy to the doctor’s thought process in this uneven but often compelling narrative.