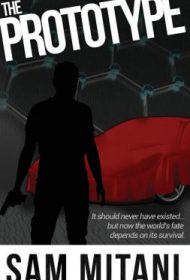 Mitani’s protagonist is 25-year-old automotive journalist Stockton Clay, a half-Asian writer and low-level staffer at Automobile Digest magazine. He’s also an avid gamer and an orphan with few clues to his lineage.

His editor is intrigued when mysterious industrialist Tetsuro Kanda invites Clay to fly to Japan and test drive the company’s new sports car. Things go awry when a rival journalist changes cars with Clay at the last moment, saving him from a fiery death in a suspicious crash. This follows an earlier incident where a stranger pointed a gun at him on the highway, and a cryptic warning note in his hotel room. Clay knows he’s in real trouble, but hasn’t a clue why.

Later returning to Japan on the pretext of covering an auto show, Clay connects with Kamita Motors’ shadowy public relations manager. He also gains allies in a covert team of CIA operatives investigating Kanda and is diagnosed with a potentially fatal genetic disorder. Clay’s quest becomes a race against time to defeat adversaries seeking to weaponize Kanda’s scientific discoveries, uncover Kanda’s true purpose, and save himself.

This is an entertaining first novel that marries Mitani’s unique perspective on racing to his enthusiasm for judo and an animated literary voice. Some of the twists stretch credibility—e.g. the secret connection between Clay and the book’s villain—and there always seems to be a private jet or a pseudo-scientific resolution around the corner. But in the wake of a kinetic thriller with a charismatic protagonist behind the wheel, readers will forgive such lapses.

Combining the balletic combat of John Wick and the jet-propelled exploits of the Fast and the Furious franchise, Mitani succeeds in absorbing readers into a shadowy, futuristic Tokyo where nothing is as it seems.