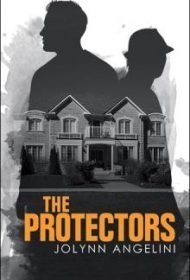 The Protectors, by Jolynn Angelini, is a mystery revolving around a group of old friends.

The story is extremely confusing and difficult to summarize without including spoilers. Described broadly: Angie and Jeff own an “exteriors” business (this is never explained) that buys an HVAC business owned by Carl, who is consistently referred to as incompetent and inept. Carl disappears and no one seems to know why, not even his wife Anna. It turns out Carl is under threat from someone in his past as part of a crime family, and his old friends have a plan to protect him. As the story continues, it’s revealed that many of the characters have a shared past.

The book’s first 200 pages refer continually to this “plan,” but readers never learn what the plan actually is, although it requires Jeff to also “disappear,” Carl and Anna’s house to be fire bombed, a house in Florida in Carl’s name to be fire bombed with four bodies inside, and a car registered to Carl to be burned with a body inside. The core of the story is revealed in the narrative’s last third, and seems to have little, if anything, to do with the elaborate plan.

In addition to the confusing plotting and storytelling, the dialogue is clichéd and repetitive: Multiple characters refer to the situation as a “shitshow,” and the phrase “what’s his problem” is overused. There’s also little context: Readers don’t know where or when the story takes place; there are no descriptions of places and very little of the people. Jeff and Angie have two children, but they’re shuffled off with Angie’s mother for the weeks this story takes place. And no one seems to be running Jeff’s business while everything is occurring.

There’s much more plot to explain. Suffice it to say that it would take a very determined reader to make it through The Protectors. Even then, the weak ending would likely render the effort unrewarding.