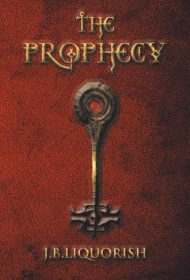 J.B. Liquorish uses prehistoric Scotland as the setting for his heartfelt fantasy The Prophecy, which features relatable characters and real-word struggles.

The protagonist, 16-year-old Warwick, grapples with loss, confusion and tragedy. He’s forced to grow up too quickly, to accept the burden of adulthood and responsibility as he navigates teenage indecision and uncertainty.

Warwick meets Rowan, a mysterious seer who tells Warwick that he was prophesied by ancient seers 500 years earlier as the one to save his country from an army of dragons. A year earlier, Warwick’s mother had given him a key she received from Rowan. That key, called the Foekey, will guide him to the means to fight the dragons, who were defeated by Scottish heroes five centuries before.

After the monsters attack Warwick’s home and murder his family, he’s left to embark on his epic quest to find himself, with Rowan’s assistance, as he saves his country.

This hero’s journey dynamic is straight out of Tolkien, and the basic fantasy components will be highly familiar to any fan: an unlikely hero emerges and, with the help of sages and guides, navigates a world of epic battles, monsters and magic.

It’s the author’s commitment to his characters, however, that makes the book interesting. Liquorish shines in his extraordinary concern for the inner battles of his main character. Although the book is set in 500 BCE, Warwick’s struggles will resonate with any reader who has faced the pitfalls of adolescence. The protagonist feels vivid and real, and the author’s obvious love for the people, majesty and ancient history of Scotland offers the tale a rare degree of authenticity.

Even if the fantasy elements feel a bit played out, fans of the genre will appreciate Liquorish’s skill at using his characters’ struggles, motivations and emotions to enliven the story.