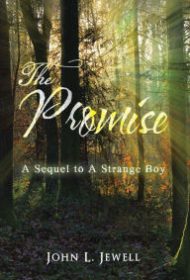 John L. Jewell’s The Promise follows the author’s A Strange Boy (2016), a coming-of-age tale initially set in 1950s England that chronicled the search by a young boy with supernatural abilities to find the truth about his father’ disappearance. This novel delves further into the story of the boy’s sister who promised to keep her little brother safe, no matter the cost.

Leslie Johns is a special kid. Not only does he have a photographic memory, he can also communicate through telepathy, among other inexplicable powers. His childhood—and that of his older sister Mary—has been nothing short of nightmarish. Brought to believe that their father was dead, the two siblings were raised by an emotionally unstable mother who, at one point, tried to kill them. Later raised in an orphanage, they endured untold horrors until finally, with a reporter’s help, they learned the truth: Their father was still alive.

Now living with their father, the children—18 and 16 years old—have a seemingly idyllic life helping their father start a dog training business. But the criminals responsible for ruining the kid’s childhoods are still awaiting trial, and one of Leslie’s friends at the orphanage is turning out to be his worst enemy….

While the narrative is fluid and readable, the story falls flat in large part because of the immiscibility of the plot threads. The novel attempts to be simultaneously a heartfelt family drama about a father reuniting with his children, a potentially apocalyptic supernatural thriller about antagonistic telepaths, and a legal suspense story surrounding the arrest and prosecution of a gang of morally bankrupt kidnappers and murderers. The novel’s latter part has an everything-but-the-kitchen-sink feel to it.

In trying to do too much, the author ends up diluting the power of each plot thread, making none particularly satisfying. The result, unfortunately, is an ambitious read that ultimately falters under the weight of its outsized intentions.