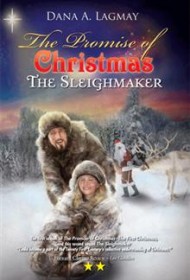 In his soon-to-be trilogy The Promise of Christmas, author Dana Lagmay carries out a lifelong dream of creating a story linking Jesus’ birth to the popular myth of Santa and his sleigh.

The Sleighmaker, Book II of Lagmay’s trilogy, opens in December of 8 AD in a Siberian trading post named Tobolsk. The post was established on behalf of King Caspar of Arabia (one of the three Magi) by his son, Prince Ezra. Ezra had traveled to the area in Book I, the Prologue notes, ultimately marrying a beauty named Hannah and promising a local oracle he would carry something back to the Middle East for him: a gift for a child to be born in Bethlehem. Thus are things set in motion for Jesus’ Middle-Eastern world and Santa’s Siberian world to intersect.

The Sleighmaker follows familiar action-story conventions, with good and bad guys, swashbuckling fights, damsels in distress, and a budding romance. One imagines that a movie version would somewhat resemble Star Wars. The plot is cleverly crafted in some ways, but the underlying premise is a stretch, even as fiction.

Lagmay’s book has other problems, as well. He intends this to be for all ages — yet it’s very difficult to follow. There are many characters to keep track of, too many with similar names: Igor, Ira, and Ivan, for example.

In addition, while readers will allow for some anachronism in historical fiction, it’s tricky business for the author to maintain readability while securing the readers’ sense of being in another time. It’s unintentionally funny, for example, when an 8 AD housewife says she needs to excuse herself to go “check the roast.”

This less-than-able handling of the book’s narrative makes The Sleighmaker difficult to recommend. If Lagmay were willing to give a good screenwriter carte blanche to create three film scripts from his series, however, he may find that he’s on to something.