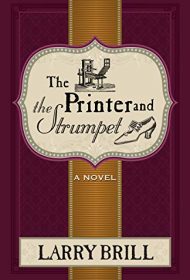 The story opens in 1773 Boston with newspaperman Leeds Merriweather laboring over the lede for his next column. When his first idea is to quote Dickens (“It was the best of times, it was the worst of times….”) long before Dickens’s birth, it’s clear this isn’t your usual historical novel.

After this curious beginning, Merriweather, whose profession makes him the perfect person to narrate the story, tells a vivid tale of the tangled events that will lead to the American Revolution. When first encountered struggling with his pamphlet, he declares himself a man of peace, neutral in the squabble between crown and colony, but eventually, it becomes obvious that his involvement is far deeper than first claimed.

His unmasking as a secret patriot begins with his growing love for the feisty Sally Hughes, who herself turns out to be other than she seems. Together, they participate in events that will shake the world, from the Boston Tea Party to the Battle of Lexington, while the author introduces a well-drawn cast of characters and other incidents, ranging from the comic to the violent (sometimes both), that will culminate in the Revolution.

In the background, the author plays a side game, beginning with the Dickens quote. Throughout, Merriweather voices lines that history ascribes to others, from Thomas Paine to those who lived far in the future, including FDR, Einstein and even Kris Kristofferson. His protagonist also livens the game by coining the term “fake news” (“Lord help us if that ever caught on”) and having one of his foes offer “alternative facts” for publication. While this injects another comic note into the narrative, its real effect is to suggest the timeless universality of the issues awakened by the Revolution.

The result is a novel that offers a particularly clever view of the nation’s first birth pangs, told in a lively, fast-paced style bound to attract readers.