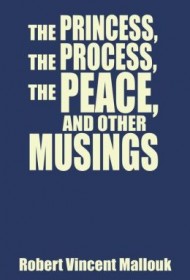 In The Princess, the Process, the Peace, and Other Musings, Robert Vincent Mallouk gathers poems he has written from the last 25 years of his life.

The book includes poems written between 1989 and 2013 and is divided into three main sections: Volumes I, II, and III. Each volume is divided further into four subsections with titles such as “Adoration,” “Reflections,” “Politics,” “Betrayed,” “Begrudged,” “Regard,” and “Respect.”

Mallouk’s poetry can be daunting to read. Almost all of the pieces are centered on the page, rhyme, and employ confusing inverted syntax, long sentences, and a formal tone imitative of the medieval age. One example of Mallouk’s circumlocution can be found in the poem “Weathering Stormy” in which a stanza reads: “Surely struck my mind may say, / If admitting, / That the cords of mystique played / Cords committing / What allure would want approached / This man’s crude core / To advance all winds to coach / Storms to restore.”

While Mallouk’s syntax is often tortured, his work delivers some interest nonetheless. Some poems attend closely to aspects of sound. In “Camping,” the opening stanza offers pleasing alliteration: “Come to camp and conform / To fancies and fits / So practiced and performed / To please some who sit / Up upon perches to judge / The cruel coerced fruit…” Additionally, Mallouk often admiringly reaches for the sublime or epic in subject matter. The poem “Kingdoms” begins, “Kingdoms some kingdoms come / While old worlds wail / To the age / To the cage / They fear they find the way / To tell such tales.”

The poet’s syntax seems to indicate someone striving to sound erudite, rather than to clearly convey a message. This is a shame, as most readers will find his work too difficult to unravel; meanwhile, such challenge overshadows any highlights of the work. Still, those who persevere may find some satisfactions, as mentioned above, in this collection.