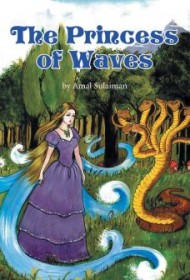 This fairy tale chapter book offers clear messages for young readers: Work hard, be patient, eat moderately, help others, and wait for true love. Princess Rodina embodies these principles, while her pot-bellied father, King Krishan, is just the opposite.

Rodina loses her mother at birth when Queen Loloa makes a deal with the river to take her away so she will no longer suffer labor pains, but she also asks the river to “take a wave and hide it in her daughter’s hair.” Rodina’s magical hair contains enough water to turn barren land to lushness. However, for years her hair remains tied up with a butterfly-shaped pin, and her lazy father allows the country to fall into ruin.

When people learn of her power, Rodina begins to help water the fields. During one excursion, she meets a handsome, though uninterested, man. She consults a witch for a magic love potion, only to discover the king has already visited the witch and procured a potion to delay Rodina’s aging and, therefore, her departure from his kingdom. Although initially angry, Rodina eventually rises to her highest good and finds her happy ending.

Through humor (a pistachio-throwing servant and stomach-jiggling king), morality lessons, and delightful illustrations by Batool Almuhanna, The Princess of Waves attempts to impart positive messages in an entertaining way. Unfortunately, these good intentions are derailed by a meandering plot, inconsistent tenses, inappropriately advanced words (“tenuity,” “deprivation,” “sterility,” “preconditions,” etc.), spelling, punctuation, and grammatical errors, and awkward phrasing. For example: “Yet, this did not stop many of them from asking for Rodina’s hand for [sic] marriage and making wield [sic] guesses as of [sic] how many hairs she had on her head, but their answers was [sic] always wrong.”

With some prudent editing for fluency and style, this book could appeal to children, who will appreciate the originality of the princess’s magical power. As it stands, however, it will have difficulty attracting a wide audience.