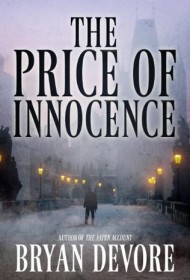 Bryan Devore’s The Price of Innocence is a fun thriller with an improbable plot: Ian, a young American grad student in economics studying in Leipzig, Germany disappears, and his older brother James, a CPA in Kansas City, flies to Europe to find him. James, who’s settled into a humdrum life, is mistaken as his wild younger brother and gets caught up in a dangerous adventure of a lifetime.

Ian is putting his dissertation into action, using economic theory to destroy organized crime by infiltrating gangs and then pitting them against each other. He’s helped by a group of activists called the White Rose, which has been revived from its previous incarnation during the fall of the Soviet Union and the dismantling of the Berlin Wall.

Other characters include a professor from the 1980s White Rose and another member, who is now Chancellor of Germany, as well as the Chancellor’s daughter, a soldier recruited to help the brothers, and a gunman assigned to accompany James to meet a gang leader so that the gunman can kill him.

The storyline has gaps: relationships between characters are cemented too quickly, and events occur that are hard to believe, such as James leaving his brother’s apartment after a fight that wrecks the place without attracting any initial attention from authorities, or a powerful crime boss agreeing to meet a young American to hear his ideas on increasing profits. There’s also a subplot that never quite gains traction, about how the brothers had a sister who was killed in a car accident years ago, and her death is what drives Ian to seek justice and save women from the sex trade.

Despite such issues, readers who suspend disbelief and just go with the flow will get caught up in the forward momentum of the plot. By the time the book climaxes at a Prague warehouse where sex slaves are housed, the action is relentless, with a satisfying denouement.