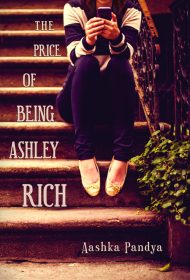 In this young adult novella, Ashley Price must rely on her five best friends when her father’s business goes under and her family is forced to give up the trappings of their wealthy lifestyle.

Author Aashka Pandya’s debut centers on the themes of friendship and father-daughter relationships. Ashley is an outgoing teen who enjoys a wealthy lifestyle. She is also the ringleader of a group of six girls who are best friends. When a toxic ingredient is discovered in Ashley’s father’s cosmetics, the brand—and the family’s livelihood—rapidly disintegrate, and the core of the six-way friendship is rocked when Ashley learns that it was the father of Alexa, one of her oldest friends, who reported the toxic chemical.

As the story unfolds, Alexa must decide if she wants to save her friendship with Ashley and challenge her father’s professional findings, or if she should keep quiet and trust her father to do his job. Friendships are tested, and both girls discover new depth in their relationships with their fathers before the story’s end.

Judging from her picture at the back of the book, Pandya is a very young author. The problems in her narrative reflect that inexperience. While the writing is clean, there are a number of plot issues that affect he story’s believability, such as the inauthentic timeline of a business’s financial struggles and the impact they have on the CEO’s family, as well as the legal proceedings that follow. Additionally, the prose lacks flair; each of the six friends is presented by name, hair color, eye color, and simplified personality traits, for example.

Nonetheless, readers will appreciate the author’s enthusiasm for the story, which is palpable, and the structure of the storytelling shows promise. Also, Pandya fearlessly broaches complicated, if somewhat clichéd, themes.

In general, the book does not stand up to YA titles that are popular in today’s marketplace. However, Pandya is learning to be a storyteller, and this first attempt is heartfelt and admirable.