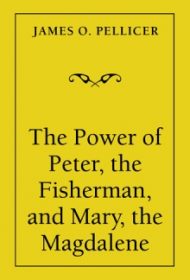 James O. Pellicer casts a highly critical eye on the teachings of the Roman Catholic Church in this dual biography of Peter and Mary Magdalene.

Analyzing sacred scripture and historical records, the author contends that translation errors, leaps of theological logic, and the blind ambition of certain rulers in Rome helped mask the true significance of these two early disciples of Jesus.

In Part I of the book, Pellicer attacks the Catholic idea that Peter is the apostolic founder of Christ’s Church on earth. He questions centuries-old understandings of numerous biblical passages, including Matthew 16:18 (which states that Peter is the rock, or foundation of the Church). He argues that “blasphemous” interpolations by Gospel translators intentionally placed the authority of God’s word in human hands (namely Peter and a succession of popes), shifting focus away from Jesus Christ as savior of the world and thus allowing a “Satanic power” to govern Rome and “dominate the world.”

In Part II, the author investigates how Mary Magdalene has been “buried in the obscurity of history.” Fault for this lies primarily in the teachings of Pope Gregory I who mistakenly (maybe deliberately) labeled Mary a prostitute, thus demoting a woman many believe may have been Christianity’s true founder. Pellicer argues that Mary Magdalene should be viewed as an “extraordinary character and remarkable personality,” a woman who held a “significant role by Jesus’ side.”

While far from a fresh perspective (Protestants and Catholics have been arguing over Peter for centuries, and there’s been an uptick in Mary Magdalene scholarship since The Da Vinci Code), Pellicer does an earnest, yeoman’s job defending his positions. The book suffers from some repetition of phrases and ideas, occasional missing punctuation, and a certain unevenness (he spends more time on Peter than Mary, who is the more interesting figure in these pages).

Nonetheless, like-minded Christians as well as fans of New Testament scholar Bart Ehrman’s work will find much to appreciate here.