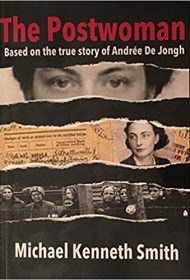 In 1940, 24-year-old Dedee encounters wounded Allied airmen at a Brussels hospital where she volunteers. Appalled to learn that upon their recovery they would be sent to German labor camps, she decides to find a way to rescue downed Allied pilots and stranded soldiers. With her father’s assistance, she devises an escape route stretching from Belgium to Gibraltar using a network of sympathizers and safe houses. Adopting the code name “Postwoman,” she delivers more than 80 airmen and other evaders—her so-called “packages”—to safety.

Then, in January 1943, Dedee’s luck changes. Captured by the Gestapo, she eventually is sent to a concentration camp. Close to starvation, she barely survives but still shows courage, resolute that “she would face whatever came and take it with her chin up, knowing she had made a difference.” She befriends other inmates and develops unlikely bonds, even with her initially hostile prison guard. As Dedee notes, “There are a lot of kind people still left in this world.”

Smith brings Dedee’s bravery to light in an action-packed narrative that immerses readers in German-occupied Europe. By imagining conversations she had with others, the author brings the characters to life and illustrates wartime relationships that endured amidst the “chaos and hatred,” of a time when “the rule of law was nonexistent.”

Occasionally, Smith goes astray by taking the focus off Dedee’s efforts and recounting the backstories of several rescued airmen. And when he hints of a possible romance between Dedee and one of these men, the scenario seems more contrived than plausible. But even if not seamlessly integrated into the narrative arc, these passages contextualize the profound human experience of war.

With maps, sources and an epilogue, this title should please fans of historical fiction, who will find it a gripping, inspiring account of a little-known WWII heroine.