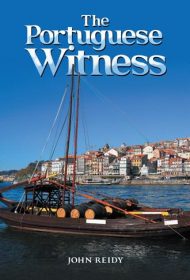 The story, set in Portugal, centers on soft-spoken Paulo, whose life is defined by tragedy: the loss of his mother at his birth and of his college fiancée in a terrible accident. Can he open his heart and face his wounds?

This seems impossible until one day Paulo brakes his car to avoid hitting a man standing in the road. The man is dressed in ancient clothing and utters an archaic Latin dialect. Aided by his rusty school days’ Latin, Paulo communicates with Claudio, eventually learning he has somehow catapulted from the year AD 410 into the late 20th century. One moment, Claudio was fleeing Suevi invaders rampaging Celtic and Roman Lusitania; the next, he was standing before Paulo’s fast-approaching car.

As friendship grows between the two men, Paulo wonders if Claudio is completely mad. But anytime he or others doubt Claudio, the Roman reveals a detail from the past—a hidden treasure, information about a ruin—that could only be known by having been there. Eventually, Paulo helps Claudio acclimate to modern life and find a treasure he hid while fleeing the Suevi, and Claudio pushes Paulo to take risks with love.

Reidy’s narrative has a strong filmic style, and the novel is rich in story-enhancing details, both ancient and modern, creating enchanting landscapes replete with food, wine, and romance. Readers are addictively pulled into his characters’ lives, while easily inhabiting Reidy’s magical world of time travel.

Only two small issues detract: The early pages are almost entirely from the omniscient narrator’s viewpoint with little dialogue, making this narrative dense and impersonal, and chapter headings often reveal plot points, undermining the tension Reidy so skillfully sets up.

Nonetheless, this is an immensely appealing novel that melds fantasy with reality in an exciting way. Even with the story’s satisfying conclusion, readers will hope for a sequel to keep this enchanted world alive.