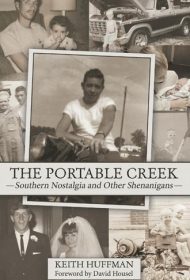 Keith Huffman is a small-town newspaper columnist with a never-ending supply of colorful relatives and touching stories. A native Alabaman, he writes for the 16,000-circulation Opelika-Auburn News and other Alabama papers, and this collection features select columns since 2016.

Consistently well-crafted, the essays cover the usual topics of small-town columnists everywhere: local characters, families overcoming personal tragedy, fond reminisces of the community’s rosy past, and personal memoir. The fact that he is a licensed professional counselor informs his perspectives and writing with sensitivity.

Huffman’s columns also burst with his proud, rural Southern identity, which is front and center in stories about summers on his grandparents’ farm, his childhood dog that was so ugly he lied to his friends about owning it, and Auburn football. In an ode to front porches, he extolls their “front-row access to virtually all Southern theatrics, especially in small towns.”

Many columns feature yarns about his large Alabama family, with grands and great-grands on both sides. His folksy tone, deep connection with days past and adherence to the newspaper column format make him seem much older than his years (he grew up in the ‘90s). It’s startling when someone who sounds like a member of the Greatest Generation writes things like, “…the glowing magic from the little box in the living room inspired me to speak my first human word. ‘HBO!’”

The title refers to his grandfather’s baptism in frail old age, with water brought in a plastic cup from the creek to be poured on his head. In that story, the characters jump off the page. But in others, family members are not drawn sharply enough to be memorable. More recent columns focus on the author’s wife and two young sons.

In all, the stories are a reliably folksy diversion, perhaps best consumed in small bites rather than too many in one sitting.