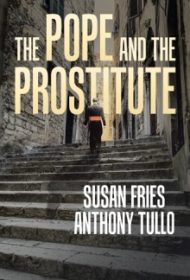 The Pope and the Prostitute is two books in one: a powerful story about the love of a brother and sister and a cops-and-mob plot about the death of a pope in the 1960s.

The book initially alternates between the childhood of Charlene and her brother Peter and Charlene’s present life. Living in WWII France, their parents are killed by a Nazi bomb while out grocery shopping, and the children are placed in a Catholic orphanage. While Peter embraces the church’s teachings and bonds with the orphanage’s Mother Superior, Charlene rages at God and resents authority. After the orphanage is bombed, the children are moved to another institution and separated when Peter is adopted by an Italian family. Charlene (who decides she’d rather be called Charley) eventually runs away from the new orphanage and later becomes a professional escort.

This part of the novel makes for enthralling reading. Susan Fries is an adept storyteller who advances the plot with believable dialogue. The wartime experiences are suspenseful (in one scene, Peter saves Jewish children from Nazi soldiers), and Charley’s progression from street urchin to rock singer to high-class escort is a rich emotional journey.

But two-thirds of the way in, the story turns: Peter’s years with his adopted family are covered briefly, leading to his position as a cardinal at the Vatican. The book then becomes a somewhat-rushed crime story involving the Pope’s murder.

Fries, who based the story on an idea from a friend who’s credited as co-author, is an engaging, vivid writer. In one passage, she writes: “A gaudy brass ashtray held the remnants of more than half a dozen recently deceased cigarette butts, though not entirely quelled, their glow unrelenting.” The novel’s first part is a page-turner—a much more emotional and engaging human story than the last third, which is a straightforward crime novel.

The result is a mixed bag: a story that offers many rewards, if not a fully satisfying reading experience.