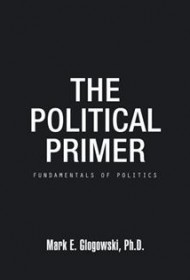 Politicians want to confuse you and often manipulate you into voting for candidates who do not share your values. But knowing which party best reflects your outlook — and committing to that party — gives you the best shot at living in a society structured to your liking, argues author Mark E. Glogowski. How to assure that you aren’t fooled into placing your faith in the wrong political camp?

In his book The Political Primer, the passionate author presents a clear and compelling framework for making voting decisions and applies it methodically in short, often-provocative chapters on illegal immigration, homelessness, health care, and other hot-button issues. The aim is for readers on any point of the political spectrum to come away savvier and less susceptible to misleading political rhetoric.

Glogowski believes we all have intransigent “Worldviews” — internal guides to what is right and wrong. He offers fun quizzes to reveal your political astuteness and identify which one of four major Worldviews you hold — each corresponding conveniently to a political party (Republican, Democratic, Libertarian and Reform). And his book will also help you avoid falling for “Politically Unrelated” comments and “”Political Untruths” that get good people to set aside and ignore their personal Worldviews.

The absence of the author’s credentials (we know he ran unsuccessfully for local office but he doesn’t tout the fields in which he has degrees, or even the profession from which he is retired), and the lack of references to related social science research, are glaring omissions, but don’t detract from the strength of his argument and practicality of his approach.

Basic without being simplistic, Glogowski’s primer is the perfect companion for the election season. He doesn’t provide solutions for complicated issues, but he does deliver an extremely useful lens for choosing leaders to address them. This is Glogowski’s call to arms. “Politics is war!” he writes, and our weapon is our vote: “Take aim!”