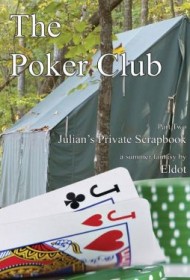 This unusual novel is sure to cause controversy for its subject matter. The second in a projected five-novel series, the book takes place at a scout camp during the summer of 1962, and follows several groups of boys as they form friendships, learn new skills, and fall in love. Much of the book concerns their various sexual explorations; indeed, the “Poker Club” of the title refers to one group’s method of beginning such activities – and the author is careful to note on the back cover that the book “is meant for mature readers.”

In between the sex, several plotlines start to form. Julian, who has a crush on his scoutmaster Mark, learns more about life matters while interacting with his fellow scouts. Tom, an older boy who has been with many other boys, finds himself falling for Nick, one of his earlier conquests and now a friend. Geoff, a co-founder of the Poker Club, recruits other scouts to join in the fun, including Tom and Nick.

While the extensive explicit sex scenes can feel somewhat exploitative, generally they are handled well, combining experience with innocence in an endearing way. Julian in particular, while certainly experienced in some sexual matters, still has much to learn. His sweet, innocent looks make Mark and the other scouts want to protect him from such things, so that, for instance, while a remark about “choice buns” makes Julian curious about what that means, he doesn’t learn the answer until nearly the end of the book.

The developing relationship between Tom and Nick is also fascinating; in the previous book, Tom hoped to seduce Julian but now only wants to be with Nick and feels guilty for his earlier pursuits.

The author includes a summary of the first novel along with maps of all locations. If readers are open to the subject matter, they will find intriguing insights into the complex world of boys in this unique novel.