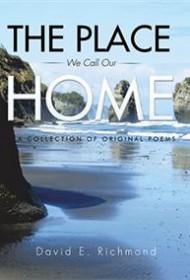 David E. Richmond, retired medical practitioner and professor, notes in his Preface that he has been writing poetry for 40 years, using it in speeches “as a means of introducing something…that might encourage the audience to remain awake.” Indeed, readers are bound to perk up when reading this collection, one that offers wisdom, wry observations about human behavior and plenty of light-hearted fun.

Richmond’s work is flavored with his New Zealand background, employing words like “gumboots,” “bloke,” and “chutty” as he describes the natural world around him, and the human one as well. He muses on lovers strolling in a park as evening descends, the disappearance of his childhood cottage, the difficult work of a farmer — and more. Titles reflect content, as in: “Morning in the Suburbs,” “Rainy Day in the Bush,” “Feeling Your Age,” “The Joy of Friendship.”

Written often in rhyme, some employ a winking humor. Any reader who has worked in a corporation, for example, will delight in “Head Office Retreat,” which details a CEO’s feigned attempt to create consensus among staff, while actually deciding everything himself: “‘Now are there questions?’ the C.E.O. asked,/barely pausing for breath as he warmed to his task.”

Others offer simple wisdom: “When your plans go awry, as they sometimes will,/and the road you tread seems all uphill,’ don’t quit; there’s a marvelous view from the crest/that only those see who have done their best…”

Not everything works as well, however. While some of his poems are vivid, fierce and stirring, many use straightforward language that is more journalistic than poetic (“The notion of retirement/conjures up anticipatory visions/of endless leisure time…”). And occasionally, he devolves into downright preachiness, as in “Exclamation Over War.”

Despite such pitfalls, readers will find a sincere and likeable speaker’s voice that engulfs them in warmth, humor and genuine emotions. While Richmond’s poetry provides a wide range of quality, there is much wisdom and fun to be found here.