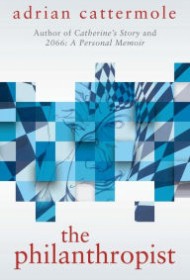 This intriguing novel is the story of a young English man who is so determined to detach from society that he leaves his loving countryside home for London, never informing his parents nor saying goodbye, and embarks on a daring and unusual life journey.

The story spans the 1960’s to 2025. The young man (we are never told his name; as the story unfolds, he is simply called “The Philanthropist”) had always been an odd child, someone who liked “rearranging” things. For example, he once delivered a girlie magazine to two spinster sisters rather than to the male subscriber.

Wanting to stay off the grid, he uses numerous identities as he ultimately builds an enormous, though secret, financial empire. In the end, he gives away all his money to hundreds of individuals, destabilizing the British economy but greatly shoring up the sagging middle class. The stunning conclusion is a grand and global political statement, but we’re not told whether this was the protagonist’s intention or if he was just ‘”rearranging” things again.

If this story were fleshed out, explaining exactly how a billionaire could live to age 80 without anyone knowing his identity, and how precisely the British government eventually locates him, it would improve the book. Unfortunately, the author delivers only the basics. Still, while the novel isn’t all it could have been, the premise and skilled prose may hold appeal for some readers.