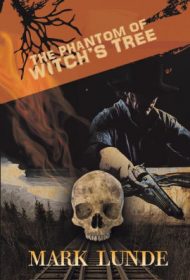 An unapologetically raunchy Western with subtle fantasy elements, Mark Lunde’s stellar debut novel, The Phantom of Witch’s Tree, is set in 1912—the last days of the Wild West—and follows one man’s redemptive journey from wastrel to legend.

Matt Hargreaves is a deputy of Widow Tree, a dying northern frontier town that’s clinging to its identity as the “authentic Old West,” even though the rest of the world has moved on with the advent of electricity, automobiles, etc. Hargreaves, whose father is the marshal, is little more than a drunk, getting paid to clean horse manure off the streets. Although a talented gunslinger, his squandered life hits rock bottom when he accidentally kills a child in a shootout just across the border in Canada and is subsequently fired from his job for negligence.

As he attempts to turn his life around, he becomes a prime target for a giant—and potentially insane—Mountie bent on finding the person who murdered the child and a psychopathic prison guard (who may be a demon in human form) with a mission to see Hargreaves dead.

Subplots involve a cast of intriguing characters, like Montreal socialite Rachel Adler who, after a stint in a sanitarium, has decided to travel West to seek her fortune prospecting for gold.

Although the shelf-bending novel has a slightly bloated feel in sequences, the narrative is skillfully powered by its well-developed characters and the author’s focus on description (oftentimes repulsive) throughout. For example: “His attempt at passing gas failed miserably as the back of his trousers blossomed into a brown sodden pancake.” Or: “The apostles were a bunch of know-nothings…Savages squatting in the bushes and wiping their hairy rumps with leaves.”

Think of this as Cormac McCarthy’s Blood Meridian meets Sergio Leone’s epic Spaghetti-Western The Good, the Bad and the Ugly in a fly-infested outhouse baking under a midday sun. It’s a highly entertaining read that, thankfully, doesn’t come in a scratch-and-sniff edition.