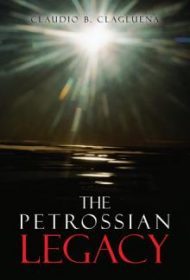 In The Petrossian Legacy, author Claudio Clagluena offers a political thriller about a multi-national game of spy versus spy.

Our hero is 70-year-old Matt Burke, a semi-retired Canadian security specialist operating in Crimea who’s about to be dragged back into the spy game. When his partner and in-house hacker Igor Kuznechov learns that a Saudi bank is funding a jihadist terrorist group, his discovery pulls the thread on a worldwide conspiracy to destabilize the Middle East and assassinate heads of state.

Via laborious exposition, Burke reveals he’s a member of Petrossian, a secret society founded in the wake of the Armenian civil war that tackles worldwide threats. The group’s counterpart is a subversive black operations unit called Cavity, with ties to the U.S. government and the military industrial complex, headed by Eileen Cahill, the bitter widow of Cavity’s founder. The cabal’s conspiracy is arcane, with ties to the Saudi bank, a clandestine French criminal empire, a shady American corporation, and even the American mafia—not to mention dozens of auxiliary characters from the CIA, the National Security Agency and Russian military intelligence.

To combat the threat, which ultimately involves attacking Iran, Burke assembles a small covert team that includes his partner Igor, a Balinese beauty, a former KGB officer, and a Ukrainian agent. Together, they crisscross the globe, engaging Cavity in Bali, on the streets of Washington, D.C., and finally in the Persian Gulf.

Burke makes for a somewhat nondescript lead, but his team’s multicultural dynamic lends the book some much-needed diversity. For storytelling, Clagluena leans a bit too hard on convenience: The perpetually available high-speed planes and Igor’s deux-ex-machina ability to hack any system are just two examples. The gyration between Burke’s first-person narration and a third-person omniscient narrator can also be jarring.

Overall, it’s a dense, byzantine spy thriller that may please readers willing put in the effort to parse the complex plot.