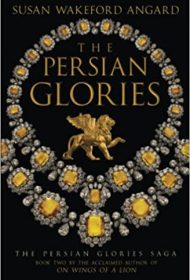 This historical novel pits its protagonists against a relentless villain out to possess a priceless jewelry set at any cost.

The book opens with the pivotal moment in 1942 when Rena Anjani, young wife of the prime minister of Iran, attends a royal ball and lays eyes on the Persian Glories, a legendary parure of canary diamonds that, to Rena’s horror, is gifted to her hated sister, Ilyia.

Then the story jumps to 1978, when, in the midst of revolution, film director Kathryn Whitney smuggles the priceless jewels out of Iran to London, only to learn that the man who gifted them to her—Anthony Evans, Ilyia’s son—has been killed by Rena’s son. Rena’s bloodthirsty pursuit of the Persian Glories will wreak havoc from England to Paris, Iran to Casablanca, compounding her deeds of the past with new crimes.

Fans of thrillers will enjoy the fast pace, though the brisk action sacrifices character development and emotional heft. The political differences during the Iranian Revolution and the resultant destruction of a culture are a mere backdrop to what turns out to be a jewel heist and espionage story replete with beautiful women and dangerous men in glamorous settings.

The protagonists feel briefly sketched, emotions veering toward the melodramatic, while secondary characters rotate in and out with little or no context. Rena is a caricature of a classic villainess, and though her passion drives the plot, her quest for the Glories isn’t rooted in an emotional need that would make her desire compelling. The story ricochets with white-knuckle tension through masquerades, car chases, kidnappings, and gunplay, but then unaccountably slows for recriminations and gratuitous sex scenes.

The crisp, unadorned prose tells an exciting story of international espionage, betrayal, and revenge. Some readers, however, might be disappointed with the comparatively thin characterizations.