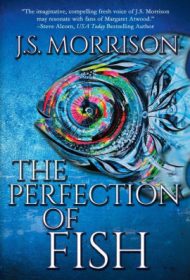 J.S. Morrison’s The Perfection of Fish is a brilliant, satirical, science fiction thriller.

In the near future, feminist influencers have promoted testosterone-suppressing drugs to decrease male aggression. To combat a perceived erosion of masculinity, misogynist billionaire Berky Benson leverages geneticists and artificial intelligence to exploit the genes of his old science teacher—meek, agoraphobic Nadia Holkam—hoping to create future generations of subservient women.

When Diana, Nadia’s prodigal twin sister, discovers Nadia’s exploitation, she sparks a resistance movement. In an entertaining, absurd series of events, Morrison propels readers through encounters with cult leaders, voodoo priests, talking fish, and corporate hitmen, while Diana fights an escalating conflict culminating in deadly confrontations and some provocative revelations, with the future of humanity itself at stake.

The Perfection of Fish is an ambitious work, an amalgam of Margaret Atwood’s socially conscious science fiction and William Gibson’s prescient techno thrillers. But the core of Morrison’s project is mordant observational humor, tilting more toward the perverse levity of satire than the heaviness of dystopia. In one instance, an Indian national who overstayed his visa hides out on a reservation with the assistance of a white, wannabe Native American. But in a comical inversion of white privilege, the accomplice, unable to document his identity, winds up arrested while trying to assert his indigenous credentials.

That’s not to say that Morrison’s illuminating situational comedy is without dark corners. And there’s plenty of violence, always pointed and never gratuitous. In an unforgettable sequence, a Muslim survivor of terrorism is gruesomely beheaded while the surrounding crowd crowns his killer a patriot.

The Perfection of Fish has numerous plates spinning at any given time, but Morrison manages to never drop one. He weaves a gorgeous tapestry of traumatic survival from the threads of current events and culture wars, lingering on our uniquely American obsessions with gender, race, nationality, and religion.

Poignant, provocative, hilarious, and original, The Perfection of Fish is an addictive page-turner from a serious new talent.