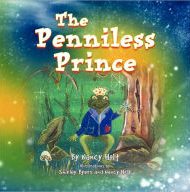 In a swampy kingdom ruled by frogs, the king and his daughter decide it’s time for her to marry. To find a suitable husband, they conduct interviews with eligible bachelors far and wide. Once they’ve narrowed it down to three candidates, they administer a test to determine who is worthy of her hand.

The three candidates—one rich but lazy, one entertaining and friendly, and one kind but poor—must compete to find a flag hidden somewhere in the kingdom. The wealthy frog purchases a beautiful new flag and orders his servants to incapacitate the second frog. He ignores his third rival, deciding he’s too poor to be real competition. Of course, the third frog is cleverer than anyone realized. He eventually finds the correct flag and rescues his kidnapped competitor. Together, they convince the king that he has the original flag and that the wealthy frog is nasty and cruel. The princess happily marries the true winner.

A satisfying, if derivative, story, The Penniless Prince would benefit from tighter prose and more focused and nuanced characterizations. In particular, the princess has little  personality, making it unclear why the kind frog wants to marry her in the first place. The story also meanders: In one example, the entertaining frog, an incidental character, receives four dense paragraphs describing his bombastic personality and the method of his kidnapping. These flaws cause the story to feel undisciplined and unpolished.

The  book’s presentation is also problematic.  Bright, multicolored backgrounds often make the text difficult to read, and the majority of the book’s full-page illustrations are blurry. These aspects pull readers out of the story, making it a less compelling read overall.

With more emphasis on character, craft, and professional design, Holt’s instincts for classic stories could find a wide audience. The Penniless Prince, unfortunately, is not quite there yet.