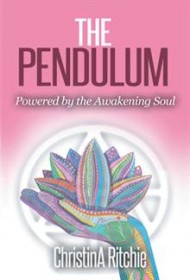 ChristinA Ritchie wrote The Pendulum: Powered by the Awakening Soul as the introductory volume about her spiritual awakening and discovery that a pendulum can be used to reveal the energetic frequencies of a person’s chakras. A second, more fully developed book is in progress, and when published will reveal “the whole story, the complete journey through the awakening process,” according to Ritchie.

The simple, relaxed writing style of this slender book, and the intriguing information it contains, whets the appetite for the next one. The Pendulum is laid out in 14 very brief chapters (generally two to three pages) in which Ritchie explains how she became aware of what a pendulum is capable of, and how she gained the surprising ability to use it to shift energetic frequencies upward in others. She rose to such high levels herself, she notes, that she became a human pendulum.

The book includes a glossary that provides definitions of esoteric terms and items, such as “ascension” and “crystal skull,” so that those unacquainted with this material won’t feel lost. (She believes, however, that anyone who picks up this book is already on the path to higher consciousness.)

Ritchie provides easy-to-understand explanations of what the chakras represent at each dimension, beginning with the 3rd and ending with the 13th. For example, she writes that chakras spinning at the 8th dimension “are brimming with potentiality. You can feel it expanding with all sorts of ideas and newfound projects that you just want to get started with….”  Also included are several pages of diagrams showing the various spins of the pendulum, such as flower pattern, infinity symbol, and helicopter.

The narrative doesn’t leave many questions unanswered, but more information on color therapy is warranted, as it is the subject that deepened her spiritual awareness. Perhaps the next book will discuss what it entails. Meanwhile, The Pendulum provides food for thought for any seeker of the truths we cannot see.