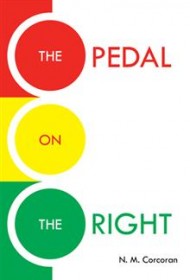 N.M. Corcoran describes The Pedal on the Right, a slight collection of essays and poems, as no Chicken Soup for the Soul, but rather “hearty meat and potatoes for every inch of you — physical, emotional, and spiritual.” And, indeed, she covers a great deal of ground, from light-hearted musings on the weather to the dark days of losing her son and her ongoing efforts to live with multiple sclerosis — the symptoms of which doctors dismissed for 10 years.

The book is divided into sections by theme. The essays — which touch on such topics as humor, philosophy, nostalgia and grief — are largely positive in their outlook and, with the exception of the section titled “Aches & Pain,” lighthearted. In “Common Sense,” for example, Corcoran writes of her common-sense approach to the weather and her childhood puzzlement over the “dreaded windshield factor.” “I could never understand the newscaster’s obsession with such a dumb thing,” she writes. “Even my parents talked about it.”

It wasn’t until the author was in her “very, very late 30s” that she suddenly understood that she had misheard the forecaster all those years. “One day, there it was! The dreaded windshield factor had mysteriously become the even more dreaded wind chill factor. This meant dressing in twice as many layers and maybe even adding extra socks to today’s wardrobe. But didn’t I already know that?”

The writing is as widely mixed as the subjects. While it is at times lightly entertaining, it tends to veer toward the juvenile, such as pieces that deal with flatulence (apparently a commonly accepted practice during wedding polkas) and the true purpose of corn in determining the health of our intestines. Readers likely will most enjoy the honest, heartfelt writings in which Corcoran shares the struggles and triumphs we can all understand.