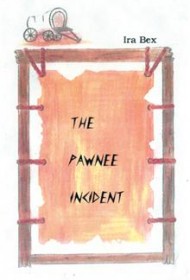 The Pawnee Incident starts off with a bang and only picks up speed after that.

East Coast newspaperman Frank Cotter is new to the West, a tenderfoot doubly burdened by the alcoholism he’s trying to kick. Bad enough that the stagecoach that delivers him to Junction City, Kansas, is beset by robbers. Worse, when Cotter finally arrives, he learns that his physician friend Lester Lomax – who lured him there with the promise of a job and a fresh start – is dead.

Cotter is plunged into a world just emerging from the waning days of the Old West. Author Ira Bex (pen name for Australian writer Ronald B. Williams) delivers many of the stereotypical characters associated with classic westerns – cowboys and Indians, sheriffs and ne’er-do-wells, a rich and influential rancher and a madame nearly his equal in wielding political and financial influence. Cowboys supplement their wages with holdups; the local Pawnee are corralled on a reservation, where many are dying of purposely inflicted disease; the rancher’s sway is crumbling before the power of the federal government.

And the influential madame? Well, she gets caught up in the same mystery that nags Frank Cotter: Was his friend Lomax’s death really an accident? Did it have anything to do with a supposed miracle cure that Lomax had discovered for the Indians’ ailments? Or was that “cure” actually part of a diabolical plot to destroy the few remaining Pawnee?

Bex’s fast-paced plot carries readers past typographical and grammatical errors, as well as distracting typeface changes. Even his minor characters are satisfyingly nuanced. And a twist at the end serves to render Cotter’s ostensible victory over his demons — both real and psychological — realistically hollow. The final days of the Old West, it seems, were a fine predictor of the uneasy modern era just beginning to dawn.